For her exhibition at BO, Anna Sofie Mathiasen shows new works within the media stop-motion animation, collage and drawing – all based on the history of Anatomigården (the gallery’s premises).

In Mathiasen’s fictionalized version of a piece of Oslo’s urban history, one will encounter a number of both historical and semi-fictional figures; Oslo’s executioner, his apprentice, the citizens, the dead body, the wise wife mother Sæther, Petite filles, the doctor and anatomist Michael Sjelderup, the medical students, the narrator, the devilish accountant Zobolam, Henrik Wergeland and his two pets; Hoggorm and the horse Veslebrun. The exhibition shares the title with Henrik Wergeland’s “Pigen pay Anatomikamerer”  (“The Girl at the Anatomy Chamber”.) Central to the exhibition is the stop-motion animation with voice over by Eirik Sæther, Finn Adrian Jorkjen, Kristoffer Cezinando Karslen, Marianne Heier, Unn Vibeke Hol and Mathiasen himself.
The exhibition is supported by the Cultural Council and Billedkunstnernes Vederlagsfond. 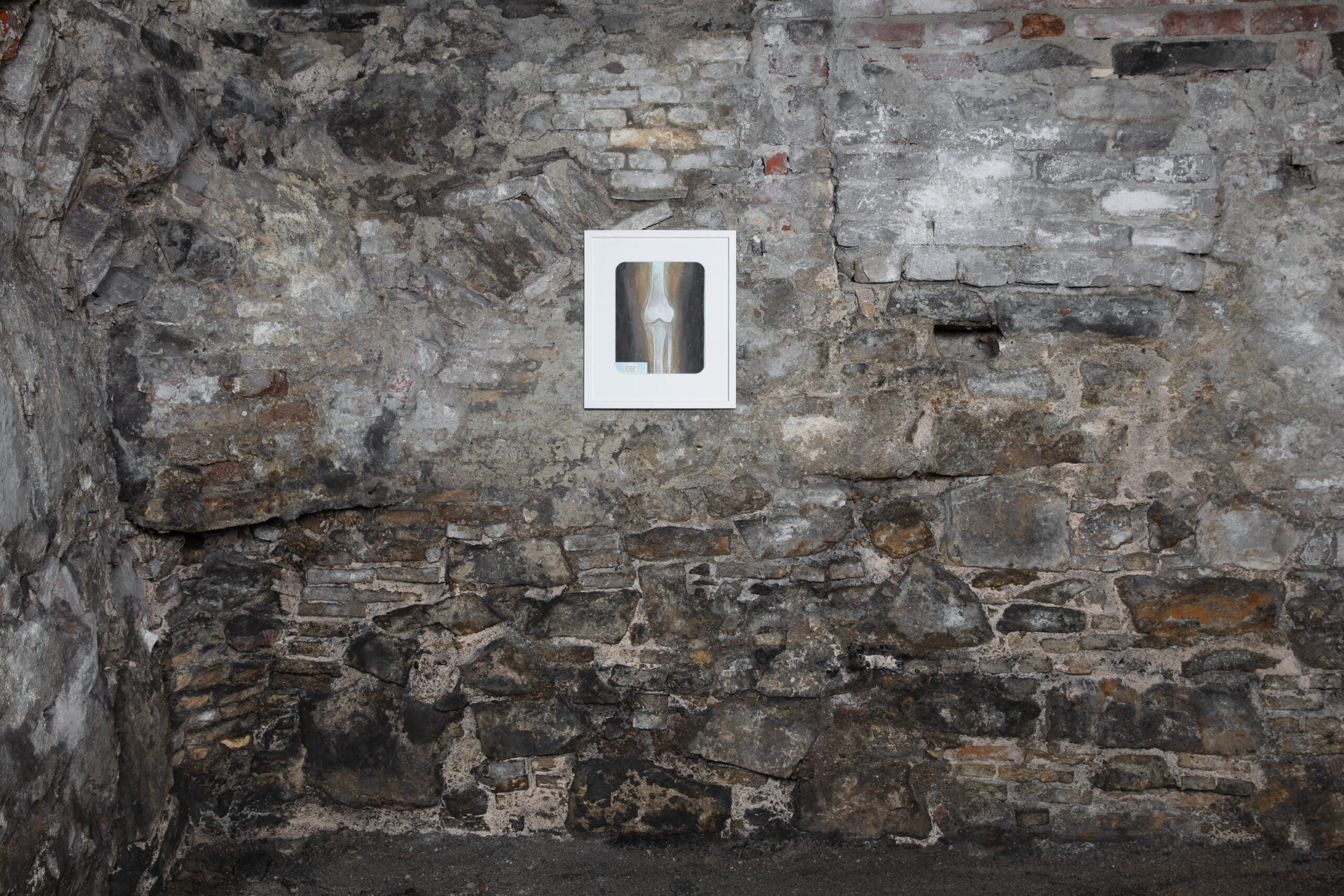 In Pigen paa anatomikammeret[1] Anna Sofie Mathiasen uses collage and stop motion animation of archival material not only as techniques but as examples of a way of coexisting with history.

Anatomigården, the building that now houses (BO) Billedkunstnerne i Oslo, was from 1815-1852 where the University of Oslo’s medical faculty housed its anatomy department.[2] After the building was used as an anatomy theatre, it was used by civil servants.[3] And, since 1860, the building has been used by artists. Prior to its occupation by BO, Unge Kunstnernes Samfund was housed there from 1937 – 2003.[4]

The historical figure who perhaps best spans these apparently disparate disciplines (anatomy, dissection, civic service and art)[5] is Henrik Wergeland, poet, writer, newspaper editor, archivist, social commentator, trainee priest and amateur anatomist.[6] Alongside Wergeland’s celebrated writing, he took a keen interest in medicine. His burgeoning obsession drove him to exhume a body. Wergeland had a lifelong grudge against lawyers, and maintained a years long legal dispute with accountant and lawyer Jens Obel Praëm.[7] Wergeland was therefore rejected from several priestly posts due to his unpredictable lifestyle. Soon after publishing Pigen på anatomikammaret King Karl Johan offered Wergeland a stipend[8]with which he was able to build ‘Grotten’, right below the royal palace upon what is now named after him, Wergelandsveien.[9] Wergeland died at the age of 37, and having been buried in the pauper’s section of the cemetery his body was, after public outcry, exhumed and moved to the more prestigious section of Vår Frelsers Gravlund, where it remains.

The memorial bust of Wergeland at Eidsvollsplass in Oslo was sculpted by Brynjulf Bergslien in 1881 whilst his studio was located at Anatomigården. The area of Kvadraturen has been further characterised as the site to which King Christian IV desired Oslo to be moved after the fire of 1686.[10]

This, and further dissections of history and exhumations are littered throughout Mathiasen’s exhibition, collapsing linear history into atomised segments, collaged together across time and brought into the present, such as Mathiasen casting and performing herself as an executed, disembodied head, travelling through, narrating and commenting on the story, an outsider, neither inside nor outside the narrative but providing a wry account of her own experiences of medical subjecthood.

Mathiasen’s rephotographed collages layer material from several historical time frames, sources and resolutions, all pointing towards both their temporal origin, and also the time in which they were archived, analysed and digitized. They contain characters not only from this series of works, but from prior works of Mathiasen, and characters invented by characters. Mathiasen appropriates Picasso’s work ‘Petite Fille’ casting one for each letter of the alphabet. This subtle refiguration symbolically reclaims the alphabet, or provides a new one[11], in order to subvert the story of this building, one that is a story of men. These ‘Petite Fille’ appear in Mathiasen’s film as a chorus, spirits of dismembered limbs and dissected female bodies.[12]

Sometimes animation uses ‘inbetweens’, intermediate frames between two keyframes. These wonderfully surreal frames trick the eye into ‘seeing’ more fluid movement. Mathiasen’s animation uses no inbetweens. Its ‘movement’ is thus less fluid, and highlights the mechanism of animation itself; one still frame after another. We become simultaneously aware of both the illusion of movement through time and time being composed of an infinite amount of present moments which can expand and contract. In Mathiasen’s work we move through time and time moves through us.

This ‘body’ of work critically invokes the spirits of both those who had the privilege to shape this nation and also the bodies upon which the nation was built, all released from an incisive dissection of the site itself.

[1] A title borrowed from a 1836 poem by Henrik Wergeland (1808-1845), wherein  a young medical student, about to dissect a body, realises that he recognises the woman whose corpse he is about to vivisect.

[2] It is thought that prior to this the building was the home of the city executioner, who would perform executions in Christiania Torv, right outside Anatomigården. This purported former use gave the building its alternate name Mestermandens Hus.

[5] Perhaps not so completely disparate; Leonardo Da Vinci was, after all, perhaps the most famous student of anatomy and grave robber.

[6] Also often considered to be the initiator, or ‘father’, of 17 May, Norway’s constitution day.

[7] This was, needless to say, a costly legal battle for Wergeland.

[8] which nearly doubled his income – Wergeland accepted this stipend for his role as ‘teacher of the public’.

[9] Also the road on which Kunstnernes Hus can be found, where Anna Sofie Mathiasen had her artist’s studio in 2020 / 2021 and exhibited her graduate work in 2020.

[10] An event of civic and colonial bravado marked by the 1997 Wenche Gulbrandsen civic sculpture and fountain Christian IV’s Glove.